﻿﻿﻿﻿Thank you for your applause of my parents' gift of the Ruth Mulan Chu Chao Center, and the Ruth Mulan Chu and James Si-Cheng Chao Fellowship at HBS.  I hope that you learn a little bit about the extraordinary lives my parents led, and the values-laden life that they lived and live.  Their story is truly inspirational.
- Angela Chao﻿﻿﻿﻿ 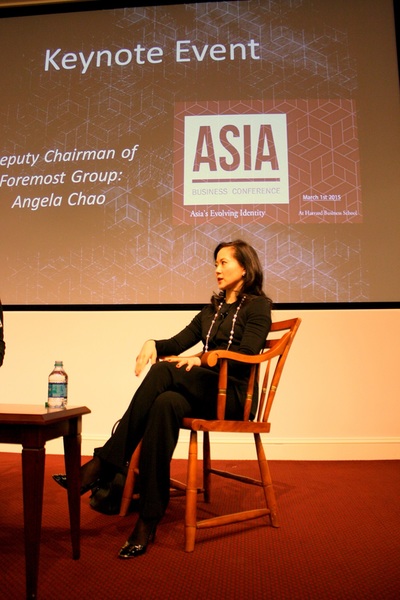 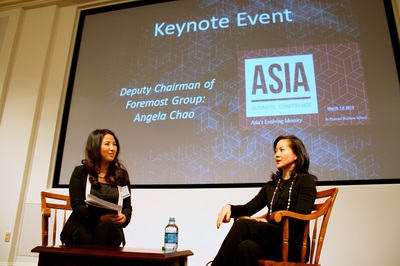 From its inception in 1994, the Asia Business Conference has grown to become the largest Asia-focused event run by students in North America. The nationalities of those in attendance spanned the globe, and the economic sectors represented lent a diversified voice to some of the most pressing questions of the day:
• Is there such a thing as Asian culture, and if so what does it look like?
• How are social and economic evolutions impacting Asian culture?
• What are the strategies that must be employed by leadership as they blend in and distinguish from the Asian influence?

Angela Chao, Deputy Chair of the Foremost Group, joined a distinguished list of keynote speakers at the Conference, including: Her Excellency Kobkarn Wattanavrangkul, CEO of Toshiba in Thailand and currently serving as Minister of Tourism and Sports in Thailand; Leiming Chen, Partner in the Hong Kong law firm of Simpson, Thacher & Bartlett; Lehut Binsar Panjaitan, founder of Toba Sejahtra Group and former Indonesian Minister of Trade and Industry.

The Conference took place over a single, very packed day. Beginning early in the morning at 8:00 am with registration, the first keynote speaker was followed by two panel discussions, lunch, the next two keynote speakers, and several more panel discussions -- with the final keynote address and a networking social to close out the day at 7:30 pm.

Despite having lived through epidemic, famine, civil war, foreign invasion, etc. my parents are amazingly optimistic and forward-looking people.  My father made this beautiful gift to HBS, because he said he wanted to thank the school for educating so many of his daughters!  That's the positive, always appreciative lens through which my parents see and experience the world.
- Angela Chao