“The Life of a Ship” 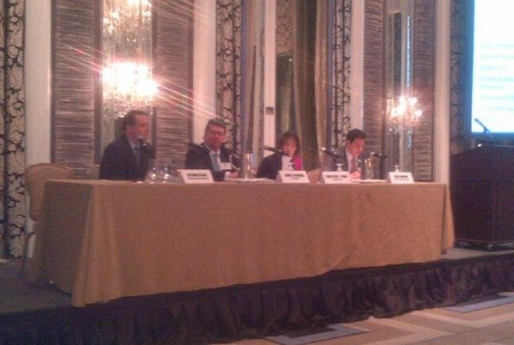 The question of how long a ship might remain in deployment is debatable, but there was unanimous agreement that the annual Joint Shipping Conference, now in its 21st year, most likely exceeds the life expectancy of a shipping vessel.

“Life of a Ship” was the name given to this year’s Conference, sponsored by the Hellenic and Norwegian Chambers of Commerce, held at the Waldorf-Astoria, New York City, on February 11, 2015. The event brought together key players in the maritime industry from across the world, to discuss such pertinent topics as: shipbuilding, new environmental regulations and scrapping rules, economic realities, as well as a lively debate over who makes the best and longest-lasting shipping vessels. The Conference was chaired by Brian P. Devine, a Partner in Norton Rose Fulbright, US, LLP, Anders Platou, Head of Shipping, Offshore and Logistics at DNB Bank, NY Branch, and Clay Maitland, Managing Director of Marshall Islands Ship and Corporate Registry. The keynote speaker was Sturla Henriksen, Managing Director and CEO of the Norwegian Shipbuilders Association.

The goal of the Conference was to stimulate conversation as to the status of the shipping industry today, where it is heading and what is the vision for its future. To this end, there were several break-out panel discussions, on topics including: Shipbuilding, Funding Issues, Commercial Management and Ship Owner Perspective, among others. Christine Chao, General Counsel of Foremost Group, served on the ship owner perspective panel, where she was joined by John D. Noonan, CEO of BLT Chembulk and Arthur Regan, President and CEO of Principal Maritime Management. The panel, which debated the very question of a ship’s life expectancy, was moderated by Josh Shapiro, Vice President of Liberty Maritime Corporation. Christine Chao spoke highly of Chinese shipyards, for their expertise in new builds, noting, though, that careful supervision is needed.

Quite naturally, at the forefront of everyone's minds was the question of the shipping market’s economic future, as was evidenced by the large turnout for Morgan Stanley analyst Fotis Giannakoulis’ address. In general, according to Giannakoulis, there is reason to be optimistic. Stocks have been holding, and even rising, although there is definitely some investor hesitancy -- as evidenced by depressed valuations. Giannakoulis suggested that a new model is needed to analyze tanker performance, noting that the historical supply and demand model is not giving the true picture. This sentiment was echoed by panelists on the Shipbuilding panel, where there was intense discussion about the impact on offshore business due to declining capital due to investments in oil exploration and production. The prognosis was much brighter for the dry bulk shipping market.